TGH Aviation offers aircraft component repair on the following Augusta Models. Below is a list of the most commonly requested repairs and does not eliminate capabilities on other instruments used in this make of aircraft. If you need an instrument repaired that is not listed below, please call our Sales Department at 1 (800) 843-4976. 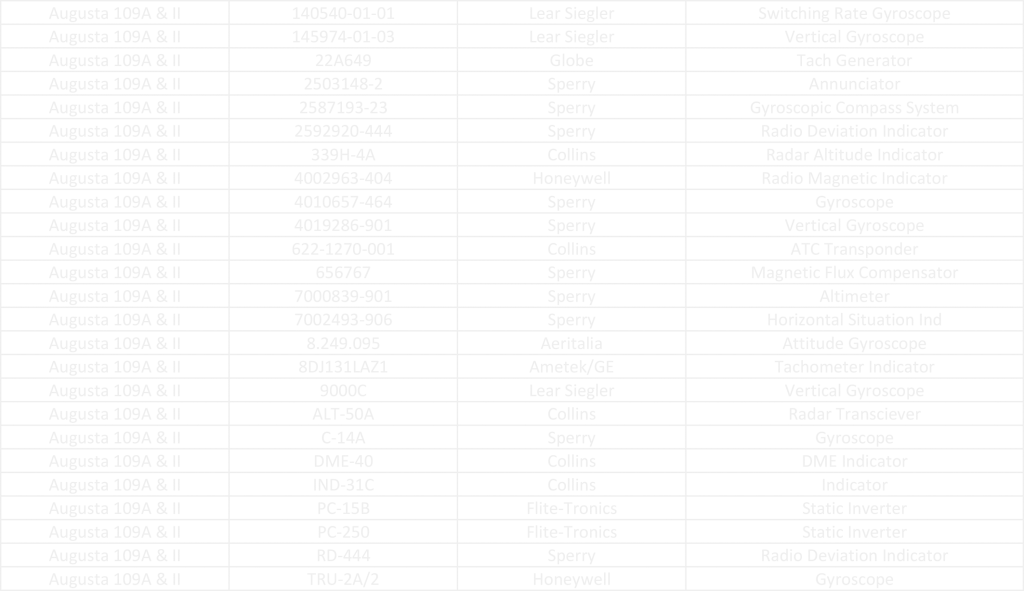 TGH Aviation offers aircraft component repair on the following Convair Models. Below is a list of the most commonly requested repairs and does not eliminate capabilities on other instruments used in this make of aircraft. If you need an instrument repaired that is not listed below, please call our Sales Department at 1 (800) 843-4976. 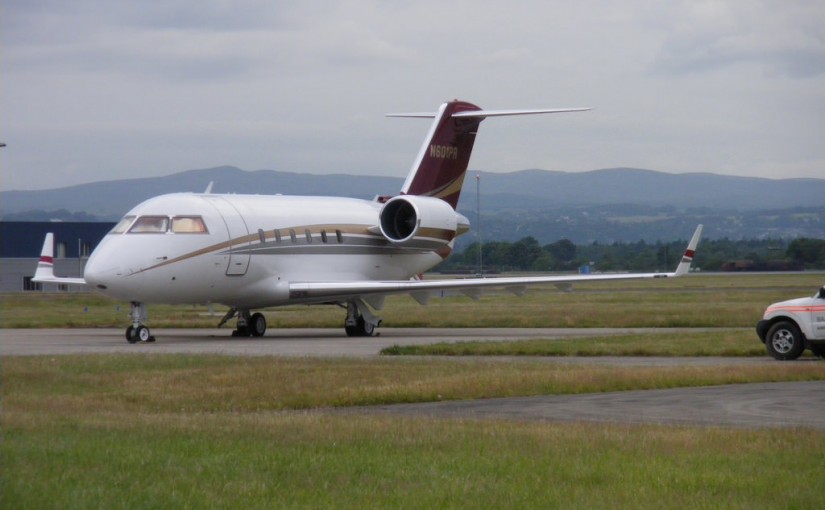 TGH Aviation offers aircraft component repair on the following Challenger Models. Below is a list of the most commonly requested repairs and does not eliminate capabilities on other instruments used in this make of aircraft. If you need an instrument repaired that is not listed below, please call our Sales Department at 1 (800) 843-4976. 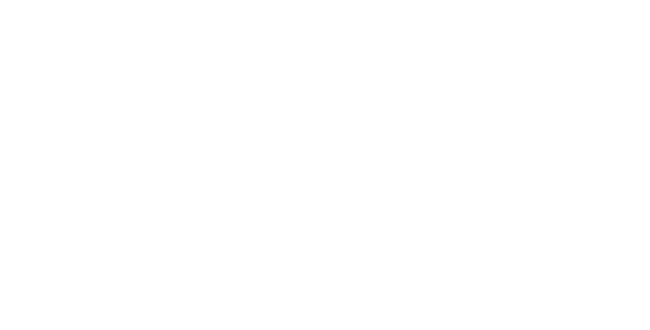 TGH Aviation, one of the most trusted and respected Part 145 Repair Stations in the industry, this year celebrates its 60th anniversary. TGH Aviation takes pride in its humble beginnings and appreciates the loyalty and dedication of both customers and employees throughout the past six decades. The company will commemorate the occasion with a number of customer appreciation specials and anniversary promotions throughout the year.

In 1957 founder Emery “Claude” Oxley Senior set out with a vision to specialize in the repair of gyroscopes for General Aviation aircraft. Claude originally began working out of his home in Riverside, California before his son Emery moved the business to a small wooden building in Auburn, California and joined forces with Chief Engineer, Rich Anderson. The early years were critical to the long term success of The Gyro House, now known as TGH Aviation. The founders built a strong infrastructure for the future by developing the TGH Aviation reputation as a top quality aircraft instrument repair facility with superior customer service.

Over the course of the last 60 years, TGH Aviation has vastly expanded its capabilities beyond gyroscopes, evolving into a diverse aircraft instrument repair facility that has become known world-wide. TGH Aviation now offers over 20,000 service capabilities, including the repair of primary flight instruments, avionics, aural warning systems, fuel flow transmitters, and their related indicators and refueling sensors. Today TGH Aviation is a valued supplier to the United States Department of Defense, NATO and a world-wide network of aviation maintenance facilities and parts brokers while still maintaining its legacy customer base of General Aviation pilots.

TGH Aviation provides outright sales, exchange sales, avionic installations and upgrades, repair services, and holds distributorships for most of the major manufacturers of the aforementioned product lines. The company’s repair shop customer base spans all areas of the industry from general aviation, corporate aviation and commercial aviation. The customer base includes airlines, parts brokers and maintenance facilities on five continents.

The past 60 years have been a hugely successful time for TGH Aviation, which now consists of a fully operational repair station, fuel lab, online pilot supply store and an avionics hangar. A veteran-owned company, TGH Aviation employs forward-thinking, growth-oriented management and all employees work to build the company reputation while improving industry presence and stature. The company is delighted to have become a part of the local community and to have had the pleasure of working with and meeting many people over the years and look forward to continuing to build on these strong relationships in the future.

As TGH Aviation looks to the next 60 years the mission continues to be to provide customers with high quality products, overhauls and repairs, all delivered with premiere customer service. As one of the most trusted and respected Part 145 Repair Stations in the industry today, TGH Aviation strives to create a great customer experience each and every time.

For a complete list of capabilities, go to www.tghaviation.com for more information.

Airspeed is calculated as a function of the difference between Pitot Pressure and Static Pressure as follows:

Calibrated airspeed values less than the speed of sound at standard sea level (661.4788 knots) are calculated as follows:

minus position and installation error correction.

is the calibrated airspeed,

is the impact pressure (inches Hg) sensed by the pitot tube,

Units other than knots and inches of mercury can be used, if used consistently.

This expression is based on the form of Bernoulli’s equation applicable to a perfect, incompressible gas. The values for

are consistent with the ISA i.e. the conditions under which airspeed indicators are calibrated.

Keep in mind that this is for your basic vanilla airspeed indicator and does not include calculations for TRUE Airspeed for which you must include the variables of True Temperature and True Altitude.

Pitot Static System ….Inside & Out

A. Pitot Pressure:
Pronounced: PEE-TOE, it is a French word

Pitot pressure is the measurement of the air forced into the Pitot Tube by the movement of the aircraft through the air. Pitot tubes are mounted on the aircraft facing forward so that air is forced into them. Most small aircraft have only one tube, larger aircraft have a redundant system and will have two tubes. The most common manufacturer of these tubes is Rosemont Corp. which is a division of BF Goodrich. Also on larger aircraft, those that fly at higher altitudes, the Pitot Tube is heated in order to prevent icing, smaller aircraft typically do not have this function.

The Static Port is connected directly to the following equipment, depending on aircraft configuration: The Airspeed Indicator (Static Input), the Altimeter, the Vertical Speed Indicator, the Altitude Encoder, the Air Data Computer. Again connection is typically made via a hose either rubber or plastic.

Airspeed is calculated as a function of the difference between Pitot Pressure and Static Pressure as follows:

Calibrated airspeed values less than the speed of sound at standard sea level (661.4788 knots) are calculated as follows:

minus position and installation error correction.

The pointers on my altimeter are very jumpy and stick sometimes.
What is wrong?

The altimeter is exposed to the outside atmosphere. This includes all of the dirt and dust present in that atmosphere. Dirt and dust will get into the gears and cause them to stick and bind, the vibration from the aircraft will help the gears to overcome this problem but they will be very jumpy and become worse as the unit gets older. This unit needs an overhaul.

Can I convert my milli-bar altimeter to InHg or vice versa?

Yes, altimeter dials can be converted, provided that the manufacturer has published a procedure for doing so. If there are no published, FAA Approved, procedures then, no, this modification cannot be accomplished.

How often does my altimeter need to be calibrated?

The FAA requires that the aircraft static system be tested and certified biannually. The altimeter is a part of that system.

The altimeter ID plate says that it is a 35,000 Ft. altimeter, but the repair shop that overhauled my altimeter marked the unit as being certified to 30,000 Ft. Why the difference?

As altimeters get older and the parts wear the unit will become inaccurate at the higher end of its range. This does not mean that the altimeter can no longer be used; it just has to be used at the lower altitude. Therefore, it will be sold only to customers who request a lower altitude unit, typically general aviation.

What is a “car” altimeter?

Sometimes, if a unit is so old and worn that it can no longer be used in an aircraft then these units are sold at a discounted price for use in other than aircraft, typically people will use them in motor homes, cars, and boats.

Along with my altimeter, I received a correction card. What is that?

Altitude is a non-linear function.  It is impossible to calibrate an altimeter to be absolutely accurate at all altitudes. Therefore, a certain amount of error is allowable. The correction card advises the users of the amount of error in a particular altimeter. As each altimeter will have its own characteristics, the error card is identified with the unit’s serial number.

What is a TSO?

TSO stands for Technical Standard Order. This is an FAA document, which defines how a specific type of instrument should work in order to be considered airworthy. Altimeters manufactured by the following companies typically are manufactured to TSO standards: United Instruments, Kollsman, Garwin, and Aerosonic. Altimeters manufactured by the following companies typically are not qualified to TSO specifications:UMA & Falcon. If an instrument is certified to a TSO, it must state such on the ID plate. If it does not state the TSO on the nameplate then you must assume that it is not qualified to the TSO.

What are the typical failure modes of an altimeter?

How to Read a 3 Pointer Altimeter

A three-pointer altimeter, as its name implies, has three different pointers on the front 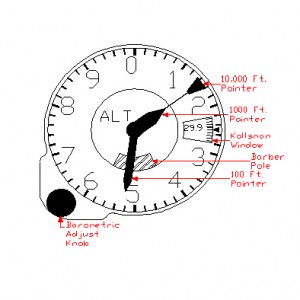 Getting to know your Kollsman Window and Barber Pole

The Kollsman window is located at the 3 o’clock position on the altimeter dial. This window allows access to read a sub-dial, which contains the barometric readings. The arrowhead indice located precisely at the 3 o’clock position on the altimeter’s main dial is used as the reference point for reading the barometric sub-dial. Most altimeters will have a sub-dial, which covers the readings from 28.1 InHg (inches of mercury) to 31.0 InHg. On the sub-dial each major indice is read as 0.1 InHg, each minor indice is read as 0.02 InHg.

As previously, stated, weather conditions will greatly affect the pressure of the atmosphere (the barometric reading). Altimeters report altitude as a function of atmospheric pressure. Typically pilots will obtain a local barometric reading from the nearest airport. They will then set the Kollsman window to the setting that they received. This action will adjust the altimeter reading, eliminating error due to local weather conditions.

Some altimeters will have a Kollsman Window, which reads out in milli-bars in lieu of InHg. These are usually altimeters designated for use in Europe. However use of milli-bars has become more common in the U.S. during the last few years. Milli-Bars is just another unit of measurement, 1013.2 milli-bars = 29.92 InHg.

The “Barber Pole” on the face of the altimeter is visible only when the altitude is above sea level. When the altitude is below sea level the barber pole is no longer visible. This is provided to avoid the error of reading –1,000 Ft. as being +10,000 Ft.

The altimeter provides the basic function of indicating to the pilot the altitude of the aircraft above mean (average) sea level (MSL).  The indicator is normally a 31/8” size dial face with multiple pointers or a combination of pointers and counter drum. Location of this indicator is typically in the top row of instruments near the center of the instrument panel. In a standard “T” configuration panel the altimeter is just to the right of the attitude gyroscope.

The various types of altimeters include:

Most general aviation altimeters will fall into the first two ranges. Ranges above 35,000 Ft. are typically corporate jets, commercial aircraft, and military aircraft.

The counter-drum altimeter is named as such because it displays altitude utilizing a single pointer and a rotating drum that displays digits. The drum displays ten thousand and one thousand foot increments. The pointer displays from 0 to 999 feet.

An encoding altimeter can be of either the three-pointer or counter drum type of altimeter with an encoding module built into it. The encoding module takes the altitude information and converts that data into a digital code. This code is then sent via a set of wires to the aircraft transponder. A transponder is a radio device that reports the aircraft altitude to ground control radar.

The blind encoder is a very special type of altimeter. This unit has no dial or read out that is visible to the user. It has only an electronic output to the aircraft transponder. The use of a standard altimeter in conjunction with a blind encoder is often more economical than purchasing an encoding altimeter.